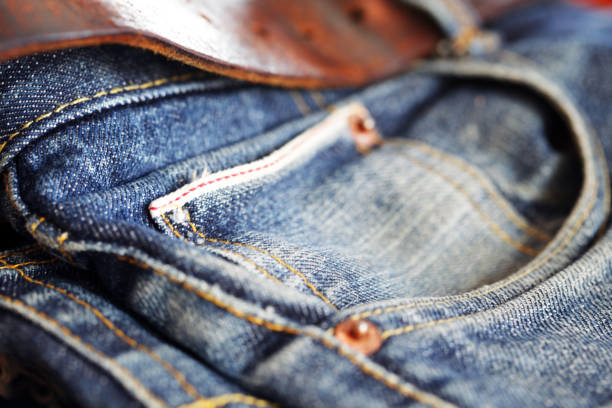 Remember those dark dressed down indigo jeans, sometimes rolled up to reveal bare ankles and Selvedge ends? A simple white tee and an untouchable, rebel attitude? This basic style of Raw Indigo Blue Jeans was rampantly popular among style icons such as James Dean, Marlon Brando and Marilyn Monroe, to name a few. These Hollywood trendsetters brought much-deserved popularity to the so-called Selvedge Raw Jeans. So much so that their taste not only reached and resonated with millions from all over the world (including Japan) but was possibly, partially responsible for their greatly increased demand in the United States.

A demand that no longer solely consisted of manual labour workers, searching for durable overalls that wouldn’t unravel during their working hours on the field. Large enough for the denim industry to scramble for new, faster and more efficient methods of satisfying such a growing demand for a good pair of dark blues. Despite the fact that the transition meant greater availability and more affordable denim prices, it also meant mass production that prioritized speed over sturdiness. Traditional shuttle looms on which the threads were previously tightly woven on for resilience, became increasingly less popular in the United States.

The modern technologies took over to produce smooth but identically overlocked pairs, that just didn’t provide the same unique imperfections, character or longevity as before – over time unravelling and fraying. This caused them to become easily replaceable for cheap, instead of being crafted for decades of use with a potential future repair. Most importantly, this trend of dispensability prompted the decline of minimalism and infatuation with a single article of clothing.

The idea of owning a sole pair of jeans that could always be relied upon started to seem unattainable, on the verge of dying out. Resulting only in fond memories and a longing for that favourite, vintage pair of selvedge raw jeans that evolved each time they were worn. The authentic denim that developed new markings and personal fades over time, that would be sported as proudly as backpack pins, medals of honour, a display and a reminder of previous experiences and achievements.

Fortunately for denim connoisseurs, Japan was stocked with shuttle loom factories which allowed it to step in to provide the quality and attention to detail that was slowly fading in the United States. The Japanese Selvedge Raw Jeans till this day provide that longevity, personalisation and the best long-term value. Therefore, if you too are nostalgic but looking for a modern take on this quality jean, ours at D’loop are made with handpicked organic cotton, weaved and dyed in Japan and manufactured in Germany. Could you imagine a better combination? Neither could we.